How a magazine of hybrid, radical street art, barrio iconography, and avant-garde literature questioned, expanded, and experimented with the possibilities of Chicano urban identity.

This section of the ChismeArte Digital Experience recreates the 2008 exhibition “ChismeArte ¡Y Que!” in a collaboration with Cal Poly San Luis Obispo’s Robert E. Kennedy Library and  the Department of Ethnic Studies. 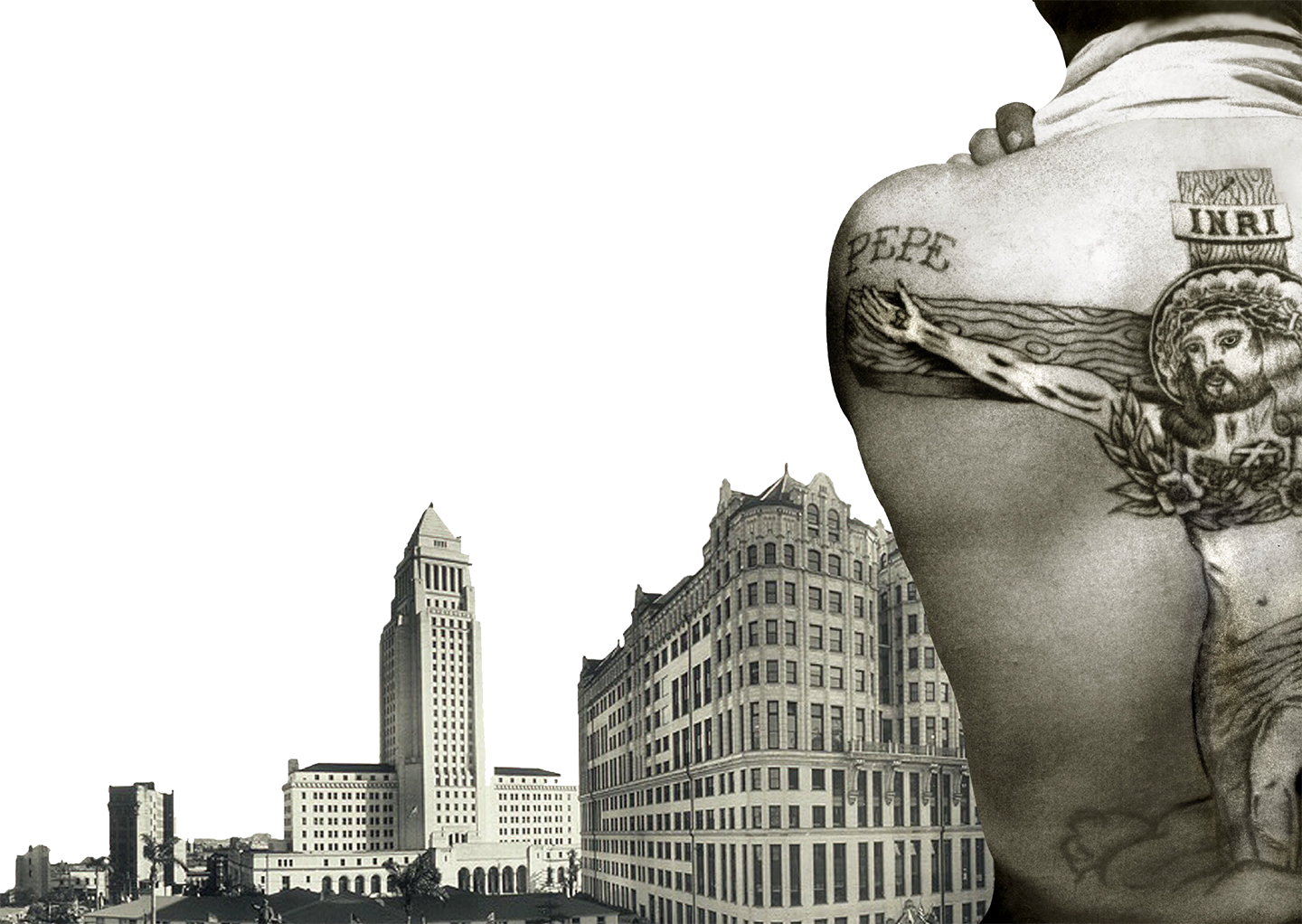 The artists, writers and designers who collaborated on this magazine used Chisme Arte as a vehicle to create new strategies for the expression of a Chicano political ideas, aesthetic discourse, and identities. For the creators of Chisme Arte, the audience was just as important as their magazine’s content. In fact, it was the content. Over the course of Chisme Arte’s eight-year run, the magazine’s pages provided both readers and the collaborators with a space in which to test new ideas. Its art and texts also served as a place to test new strategies of self-representation, rather than merely re-affirm didactic examples of what it meant to be Chicano. Instead, each edition reflected the shifting political, social and aesthetic concerns held within the larger Chicano movement.

This exhibition provides a survey of themes found in the magazine’s pages, represented through a selection of magazine covers, inside art, and literature, over the course of Chisme Arte’s 11-edition life span, which ended in 1984. As the greater Los Angeles art and literary community would soon discover, the magazine’s cadre of Chicano artists and writers would later emerge as major figures by the late 1980s and 1990s. As a whole, its covers, inside art, and texts provide an entry point into a historical movement embodied by the confluence of these diverging styles, voices and politics.

Looking back at this magazine nearly twenty years after its inception, it is clear that the themes addressed in the pages of this magazine such as gender identity, sexuality, social history, and community activism are still alive in well in the Chicano community today. However, it is the visual and literary languages employed on and in these magazine that allow us, as contemporary viewers and readers, an opportunity to understand the sites of influence and historical significance that the Chicano movement embodied.

The art on the covers of Chisme Arte borrowed visual references from Chicano street art, religious iconography, mid-century Cuban Socialist graphic design, the Latin American literary “boom” and revolutionary testimonio, as well as the emerging experimental aesthetic of Chicano camp. This magazine was also product of the post-modern pastiche or sampling, used by these artists and writers as both an aesthetic and an expressive tool. It is clear that in style and substance this magazine was ahead of its time.

The exhibition highlights a moment in the careers of a cadre of Chicano authors and artists who would later receive critical acclaim for representing and re-defining L.A.’s Latino experience. ChismeArte Magazine offered writers and artists a rare venue in which to experiment with Chicano identity.

The magazine’s motto—a “Molotov cocktail for aesthetic appetite”—illustrates that provocative stance toward its readers. Not always seamless in their pastiche, the magazine’s creators attempted to use ChismeArte as a vehicle for self-expression and critical debate within the Chicano community.

Her birth in 1944 in the San Joaquin Valley to Yaqui-Mexican farm worker parents grounded her earliest work in farm worker struggle for social justice. The UC Berkeley graduate and internationally exhibited artist is known for pastels and prints that explore the possibilities of Latina identity. Her illustration of “The Virgin of Guadalupe” offers a feminist re-interpretation of Latin America’s most important religious icon. She replaces her sacred image with a woman karate-kicking her way out of, or from her aura, as she battles injustice. Sun Mad, her most recognized work, ironically recasts the Sun Maid logo into a woman’s skeleton packing raisins under a punishing sun.

The East L.A. native described as “So L.A.” is today known for his colorful, dreamlike cityscapes such as Los Muertos, and Ayi! Dream of Chicos Corazon. His early involvement with Los Four, the pioneering art Chicano gang, brought him to Carlos Almaraz, whose vibrant pastels, midnight palette, and iconography influenced Limon’s gallery work. The “Alley River Cat’s” painted on huge L.A. storm drains, however, represent his most seen work. He has also earned recognition as a community arts activist, organizing such events as the annual Dia de Los Muertos celebrations at East L.A.’s Self-help Graphics.

Born in California in 1994, Villanueva grew up in the Mission district of San Francisco with her grandmother. Her younger years were harsh. She dropped out of high school in the 10th grade to have her first child, gave birth to her second at seventeen, and later lived on welfare in the housing projects with a violent husband. She survived, returned to school, earning an M.F.A. in Creative Writing at Vermont College. Her early works addressed her difficult upbringing and the love and strength she found in women. She has published consistently since 1970, winning awards for her novels and poetry. Today Villanueva teaches Creating Writing program at Antioch University in Los Angeles and lives in San Miguel de Allende, Mexico.

Like Rodriguez, Marisela Norte’s work focuses on Chicano urban imagery, but from a campy Chicana feminist perspective. Her lyric and prose poems convey L.A.’s life through snippets of overheard conversations and everyday observations made from the MTA’s Number 18 bus, the East/West route traversing the city’s social geography. She sees her work as kind of documentary pastiche, a collaborative conversation with the city’s denizens. Norte wrote, “I don’t write fiction. To me I have always felt that I’m keeping the books. I just want people to experience the everyday glimpses of life that I see, that to me are sometimes heartbreaking, but most of the time incredibly beautiful.” Norte describes L.A. as Walter Benjamin might, walking, absorbing daily activities, remembering sensations and stories suggested by Eastside streetscapes. In “Each Street/ Each Story” she mocks an immigrant male gaze: “MUCHACHAS BAILIANDO EN BIKINI! I pass these joints and must look… I hear the trampling of their feet. Men knocking doors down to get a good look at a pair of fishnet stockings.” (Chismearte, 201). 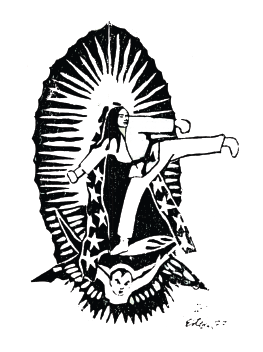 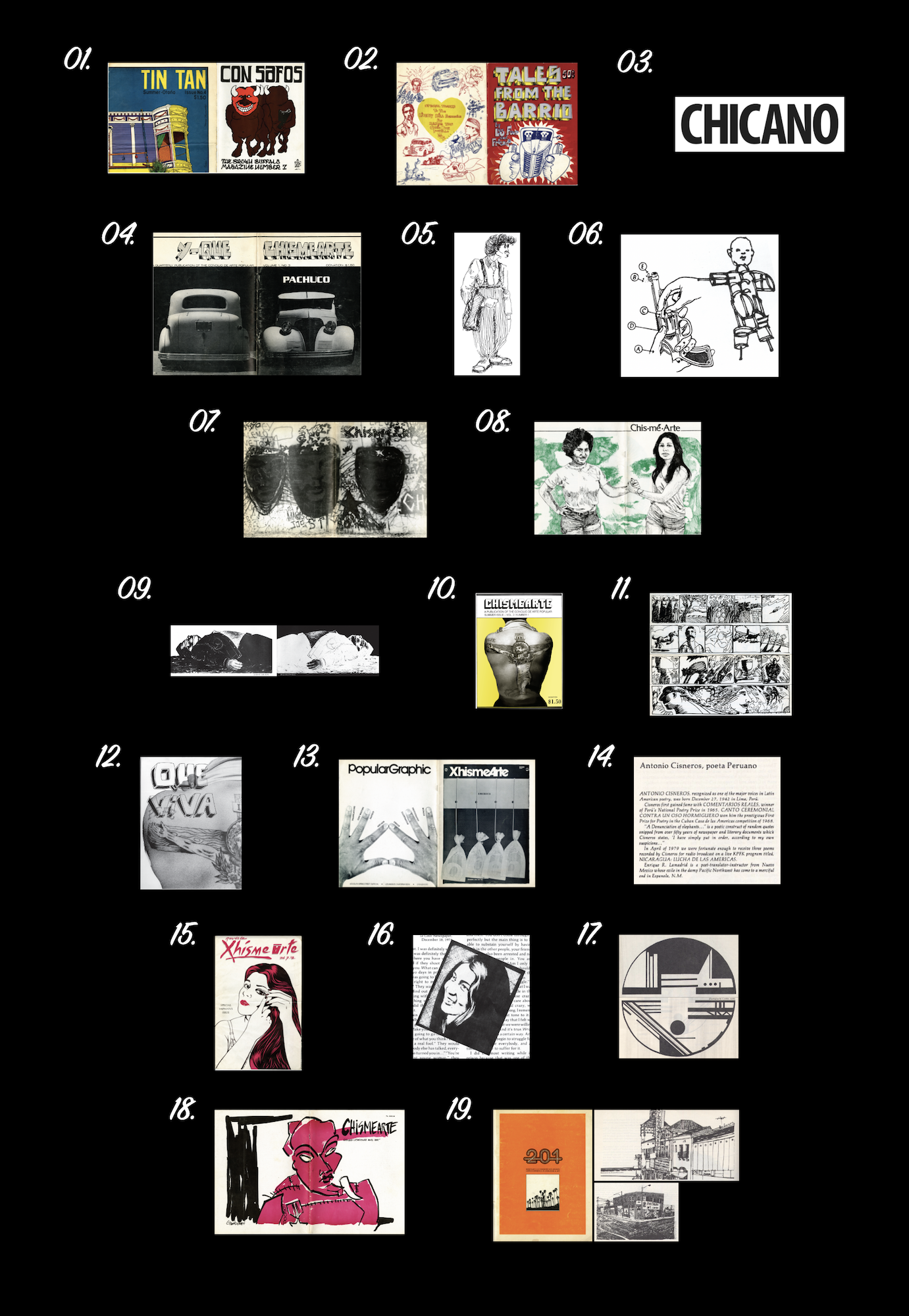 This exhibition is a productive blend of campus disciplines and boundaries with cross-department collaboration to create the design and narrative of the exhibition.

Lucena L. Valle, For use of excerpts from her thesis, “¡Y Que !: The Representation of Chicano identity on the covers of ChismeArte Magazine.”