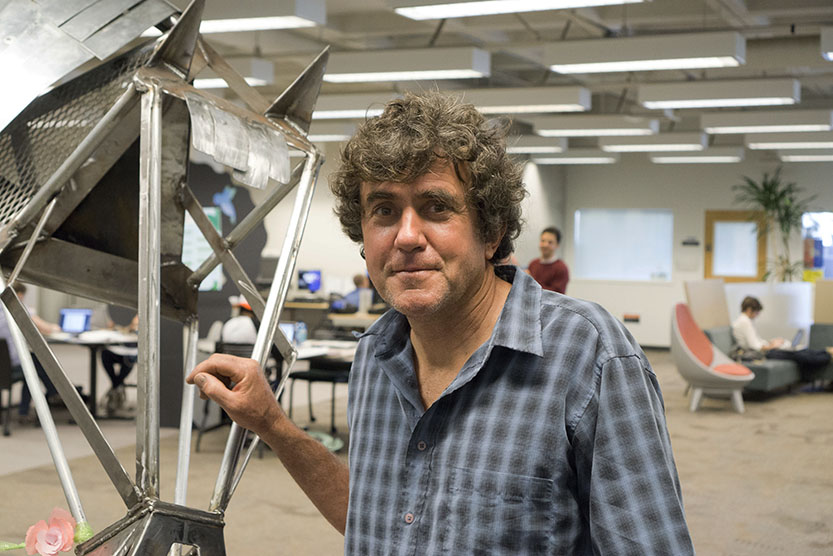 The motivation for student participation for the Mustang sculpture in the Living Library exhibit started with the desire of professional artist, Ivan Mclean, to work with students on a Cal Poly campus sculpture. Ivan Mclean, a Cal Poly Farm Management alumni, is a sculptor and best known locally for his trio of spheres installed at the Cal Poly Performing Arts Center outdoor plaza. In response to Mclean’s request, Kennedy Library Curator, Catherine Trujillo, put forth the Living Library exhibit as an opportunity for Ivan to work with students. Ivan mentored students throughout the process including teaching basic welding.

Portland-based artist Ivan McLean works with a variety of materials and styles. He creates commissioned installation pieces of any size for both public and private spaces. The son of a contractor father and photographer mother, Ivan McLean grew up in rural California and developed a love for art and building things at a young age. McLean studied farm management at California Polytechnic State University, San Luis Obispo where he further honed his welding skills and took artistic inspiration from the beauty of the Central Coast. After two years in the Peace Corps, he worked on a 700,000-acre sheep station in Australia before moving back to the United States, where he continued ranching, building fences and gates, and began crafting furniture and sculpture. Thus began his sculpture career. Starting out in custom furniture and accessories, Ivan transitioned to sculpture in the early 2000s.

Currently McLean lives with his wife and their three daughters in Portland, Oregon.

“Ivan McLean’s sculptures appear to have grown on their own, assembling themselves from large numbers of individual steel elements, which magically organize into intricate, chaotic patterns like the cells of a complex organism. Of course, the artist painstakingly composes the works through hundreds of precise welds. Once installed in an outdoor setting, the playful sculptures enter into a dialogue with their environment, demanding a powerful place, yet yielding to the views around and beyond with grace.”