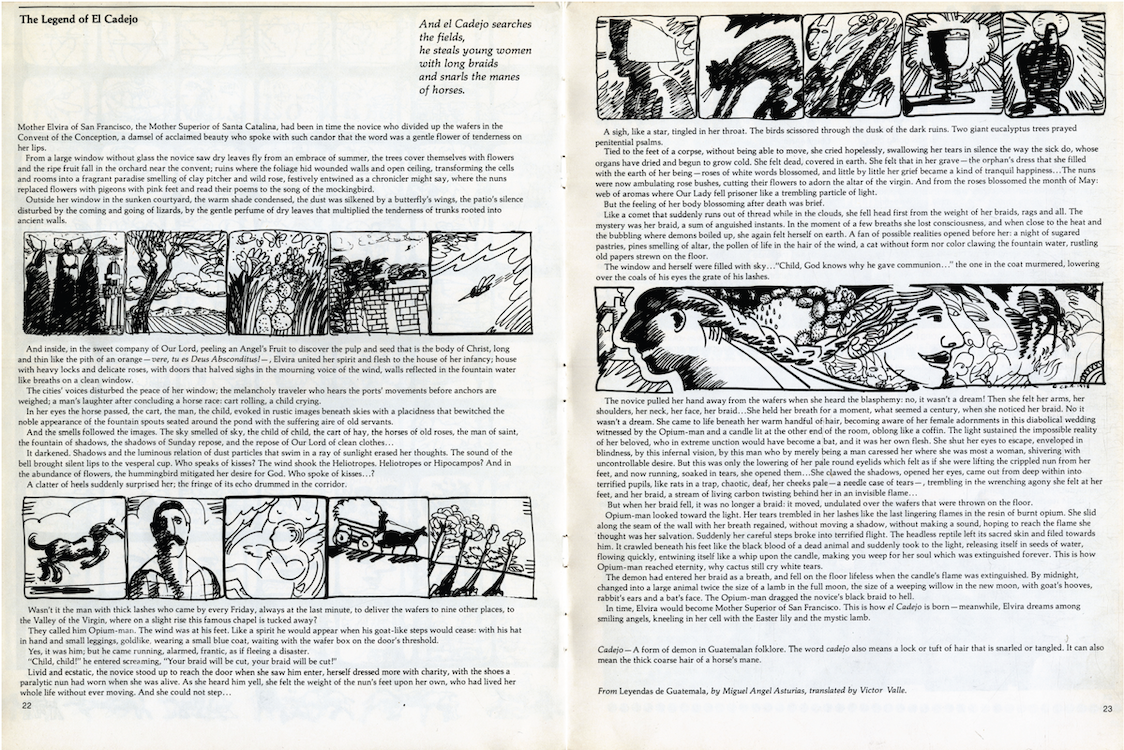 Guatemala’s Miguel Angel Asturias, winner of a 1967 Nobel Prize in literature, can lay claim to inventing Latin America’s most important literary export — Magic Realism – and yet suffered protracted periods of exile for his avowedly anti-imperialist writings. His most widely known novel, El Senor Presidente (1946), illustrates the oppressive paranoia of life under ruthless dictator, Estrada Cabrera, who ruled from 1898 to 1920. His “magic surrealism” invited his readers to inhabit a world of terror by, among other things, anthropomorphizing the dictator’s instruments of torture, giving bullets skins with which to feel “when they pass through a man’s body. They think flesh is warm, sweet, a little fat.” His other great work, Men of Maize, achieved in 1949 what no other Latin American novelist had fully realized.

The quintessential city dweller radically re-imagined a novel as if narrated by a Mayan author, drawing a complete literary technology, not just local color, from the language, rationality, and myths of the Quiche-Maya’s classic Popol Vuh, or Book of Council. The English-language translation of “The Legend of El Cadejo” published in ChismeArte originally appeared in Leyendas de Guatemala in 1930.

The Legend of El Cadejo

And el Cadejo searches the fields, he steals young women with long braids and snarls the manes of horses.

Mother Elvira of San Francisco, the Mother Superior of Santa Catalina, had been in time the novice who divided up the wafers in the Convent of the Conception, a damsel of acclaimed beauty who spoke with such candor that the word was a gentle flower of tenderness on her lips.

From a large window without glass the novice saw dry leaves fly from an embrace of summer, the trees cover themselves with flowers and the ripe fruit fall in the orchard near the convent; ruins where the foliage hid wounded walls and open ceiling, transforming the cells and rooms into a fragrant paradise smelling of clay pitcher and wild rose, festively entwined as a chronicler might say, where the nuns replaced flowers with pigeons with pink feet and read their poems to the song of the mockingbird.

Outside her window in the sunken courtyard, the warm shade condensed, the dust was silkened by a butterfly’s wings, the patio’s silence disturbed by the corning and going of lizards, by the gentle perfume of dry leaves that multiplied the tenderness of trunks rooted into ancient walls.

And inside, in the sweet company of Our Lord, peeling an Angel’s Fruit to discover the pulp and seed that is the body of Christ, long and thin like the pith of an orange-vere, tu es Deus Absconditus!-, Elvira united her spirit and flesh to the house of her infancy; house with heavy locks and delicate roses, with doors that halved sighs in the mourning voice of the wind, walls reflected in the fountain water like breaths on a clean window.

The cities’ voices disturbed the peace of her window; the melancholy traveler who hears the ports’ movements before anchors are weighed; a man’s laughter after concluding a horse race: cart rolling, a child crying.

In her eyes the horse passed, the cart, the man, the child, evoked in rustic images beneath skies with a placidness that bewitched the noble appearance of the fountain spouts seated around the pond with the suffering aire of old servants.

And the smells followed the images. The sky smelled of sky, the child of child, the cart of hay, the horses of old roses, the man of saint, the fountain of shadows, the shadows of Sunday repose, and the repose of Our Lord of clean clothes …

It darkened. Shadows and the luminous relation of dust particles that swim in a ray of sunlight erased her thoughts. The sound of the bell brought silent lips to the vesperal cup. Who speaks of kisses? The wind shook the Heliotropes. Heliotropes or Hipocarnpos? And in the abundance of flowers, the hummingbird mitigated her desire for Goel. Who spoke of kisses … ?

A clatter of heels suddenly surprised her; the fringe of its echo drummed in the corridor.

Wasn’t it the man with thick lashes who came by every Friday, always at the last minute, to deliver the wafers to nine other places, to the Valley of the Virgin, where on a slight rise this famous chapel is tucked away?

They called him Opium-man. The wind was at his feet. Like a spirit he would appear when his goat-like steps would cease: with his hat in hand and small leggings, goldlike, wearing a small blue coat, waiting with the wafer box on the door’s threshold.

Yes, it was him; but he came running, alarmed, frantic, as if fleeing a disaster.

Livid and ecstatic, the novice stood up to reach the door when she saw him enter, herself dressed more with charity, with the shoes a paralytic nun had worn when she was alive. As she heard him yell, she felt the weight of the nun’s feet upon her own, who had lived her whole life without ever moving. And she could not step …

A sigh, like a star, tingled in her throat. The birds scissored through the dusk of the dark ruins. Two giant eucalyptus trees prayed penitential psalms.

Tied to the feet of a corpse, without being able to move, she cried hopelessly, swallowing her tears in silence the way the sick do, whose organs have dried and begun to grow cold. She felt cle~cl, covered in earth. She felt that in her grave- the orphan’s dress that she filled with the earth of her being-roses of white words blossomed, and little by little her grief became a kind of tranquil happiness … The nuns were now ambulating rose bushes, cutting their flowers to adorn the altar of the virgin. And from the roses blossomed the month of May: web of aromas where Our Lady fell prisoner like a trembling particle of light.

But the feeling of her body blossoming after death was brief.

Like a comet that suddenly runs out of thread while in the clouds, she fell head first from the weight of her braids, rags and all. The mystery was.her braid, a sum of anguished instants. In the moment of a few breaths she lost consciousness, and when close to the heat and the bubbling where demons boiled up, she again felt herself on earth. A fan of possible realities opened before her: a night of sugared pastries, pines smelling of altar, the pollen of life in the hair of the wind, a cat without form nor color clawing the fountain water, rustling old papers strewn on the floor.

The window and herself were filled with sky … “Child, God knows why he gave communion … ” the one in the coat rnurmerecl, lowering over the coals of his eyes the grate of his lashes.

The novice pulled her hand away from the wafers when she heard the blasphemy: no, it wasn’t a dream! Then she felt her arms, her shoulders, her neck, her face, her braid … She held her breath for a moment, what seemed a century, when she noticed her braid. No it wasn’t a dream. She came to life beneath her warm handful ofihair, becoming aware of her female adornments in this diabolical wedding witnessed by the Opium-man and a candle lit at the other end of the room, oblong like a coffin. The light sustained the impossible reality of her beloved, who in extreme unction would have become a bat, and it was her own flesh. She shut her eyes to escape, enveloped in blindness, by this infernal vision, by this man who by merely being a man caressed her where she was most a woman, shivering with uncontrollable desire. But this was only the lowering of her p11le round eyelids which felt as if she were lifting the crippled nun from her feet, and now running, soaked in tears, she opened them … She clawed the shadows, opened her eyes, came out from deep within into terrified pupils, like rats in a trap, chaotic, deaf, her cheeks pale-a needle case of tears-, trembling in the wrenching agony she felt at her feet, and her braid, a stream of living carbon twisting behind her in an invisible flame …

But when her braid fell, it was no longer a braid: it moved, undulated over the wafers that were thrown on the floor.

Opium-man looked toward the light. Her tears trembled in her lashes like the last lingering flames in the resin of burnt opium. She slid along the seam of the wall with her breath regained, without moving a shadow, without making a sound, hoping to reach the flame she thought was her salvation. Suddenly her careful steps broke into terrified flight. The headless reptile left its sacred skin and filed towards him. It crawled beneath his feet like the black blood of a dead animal and suddenly took to the light, releasing itself in seeds of water, flowing quickly, entwining itself like a whip upon the candle, making you weep for her soul which was extinguished forever. This is how Opium-man reached eternity, why cactus still cry white tears.

The demon had entered her braid as a breath, and fell on the floor lifeless when the candle’s flame was extinguished. By midnight, changed into a large animal twice the size of a lamb in the full moon, the size of a weeping willow in the new moon, with goat’s hooves, rabbit’s ears and a bat’s face. The Opium-man dragged the novice’s black braid to hell.

In time, Elvira would become Mother Superior of San Francisco. This is how el Cadejo is born – meanwhile, Elvira dreams among smiling angels, kneeling in her cell with the Easter lily and the mystic lamb.

Cadejo – A form of demon in Guatemalan folklore. The word cadejo also means a lock or tuft of hair that is snarled or tangled. It can also mean the thick coarse hair of a horse’s mane.