The slider below contains 2 slides. 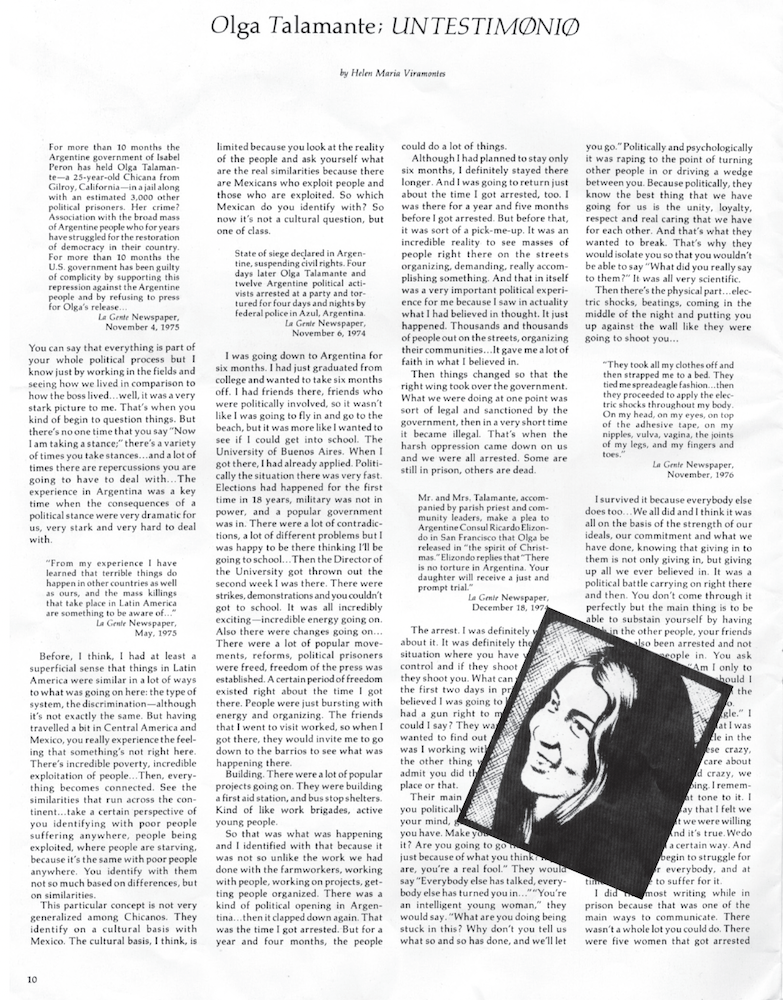 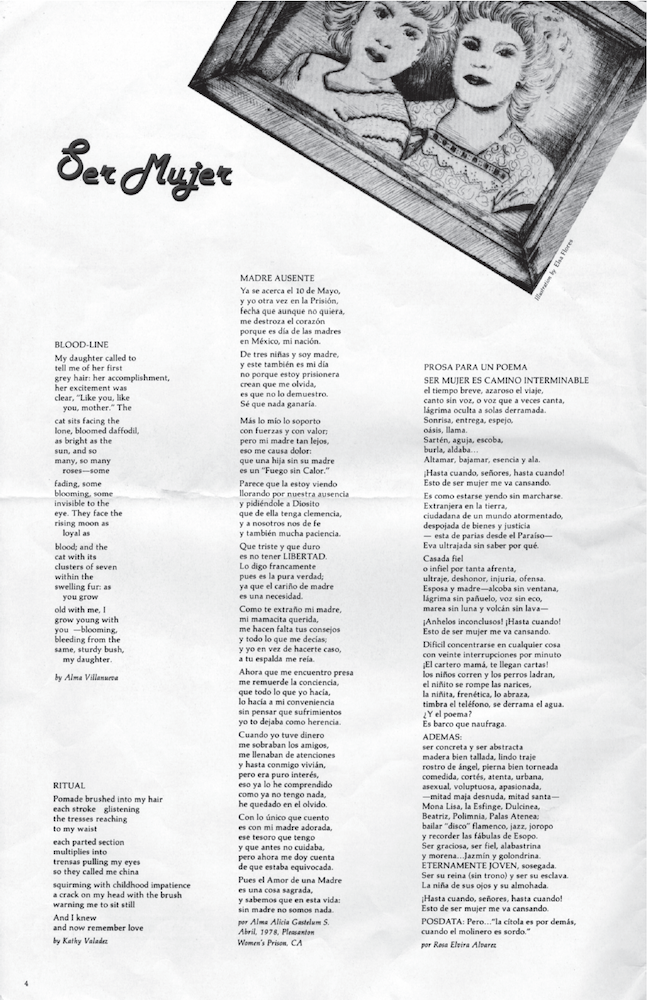 Born in 1954, the daughter of a Mexican construction worker and Chicana homemaker grew up in East L.A., attended Garfield High School, where she joined the 1968 “Chicano Blowouts,” or student walkouts. She graduated from Immaculate Heart College with a B.A. in English Literature in 1975. She published some of her first works of fiction and non-fiction in ChismeArte before earning an MFA from UC Irvine in 1994. She has published a critically acclaimed collection of short stories, and two novels, Under the Feet of Jesus, and Their Dogs Came With Them, award-winning works recognized for their technical ambition and unflinching portrayals of the exploitation of Mexican immigrant children and women.

“For more than 10 months the Argentine government of Isabel Peron has held Olga Talamante—a 25-year-old Chicana from Gilroy, California—in a jail along with an estimated 3,000 other political prisoners. Her crime? Association with the broad mass of Argentine people who for years have struggled for the restoration of democracy in their country. For more than 10 months the U.S. government has been guilty of complicity by supporting this repression against the Argentine people and by refusing to press for Olga’s release…”

You can say that everything is part of your whole political process but I know just by working in the fields and seeing how we lived in comparison to how the boss lived … well, it was a very stark picture to me. That’s when you kind of begin to question things. But there’s no one time that you say “Now I am taking a stance;” there’s a variety of time you take stances … and a lot of times there are repercussions you are going to have to deal with … The experience in Argentina was a key time when the consequences of a political stance were very dramatic for us, very stark and very hard to deal with.

“From my experience I have  learned that terrible things do happen in other countries: as well as ours, and the mass killings that take place in Latin America are something to be aware of … “

Before, I think, I had at least a superficial sense that things in Latin America were similar in a lot of ways to what was going on here: the type of system, the discrimination—although it’s not exactly the same. But having traveled a bit in Central America andMexico, you really experience the feeling that something’s not right here. There’s incredible poverty, incredible exploitation of people … Then, everything becomes connected. See the similarities that run across the continent… take a certain perspective of you identifying with poor people suffering anywhere, people being exploited, where people are starving, because it’s the same with poor people anywhere. You identify with them not so much based on differences, but on similarities.

This particular concept is not very generalized among Chicanos. They identify on a cultural basis with Mexico. The cultural basis, I think, is limited because you look at the reality of the people and ask yourself what are the real similarities because there are Mexicans who exploit people and those who are exploited. So which Mexican do you identify with? So now it’s not a cultural question, but one of class.

I was going down to Argentina for six months. I had just graduated from college and wanted to take six months off. I had friends there, friends who were politically involved, so it wasn’t like I was going to fly in and go to the beach, but it was more like I wanted to see if I could get into school. The University of Buenos Aires. When I got there, I had already applied. Politically the situation there was very fast. Elections had happened for the first time in 18 years, military was not in power, and a popular government was in. There were a lot of contradictions,

a lot of different problems but I was happy to be there thinking I’ll be going to school. .. Then the Director of the University got thrown out the second week I was there. There were strikes, demonstrations and you couldn’t go to school. It was all incredibly exciting—incredible energy going on. Also there were changes going on … There were a lot of popular movements, reforms, political prisoners were freed, freedom of the press was established. A certain period of freedom existed right about the time I got there. People were just bursting with energy and organizing. The friends that I went to visit worked, so when I got there, they would invite me to go down to the barrios to see what was happening there.

Building. There were a Iot of popular projects going on. They were building a first aid station, and bus stop shelters. Kind of like work brigades, active young people.

So that was what was happening and I identified with that because it was not so unlike the work we had done with the farmworkers, working with people, working on projects, getting people organized. There was a kind of political opening in Argentina… then it clapped down again. That was the time I got arrested. But for a year and four months, the people could do a lot of things.

Although I had planned to stay only six months, I definitely stayed there longer. And I was going to return just about the time I got arrested, too. I was there for a year and five months before I got arrested. But before that, it was sort of a pick-me-up. It was an incredible reality to see masses of people right there on the streets organizing, demanding, really accomplishing something. And that in itself was a very important political experience for me because I saw in actuality what I had believed in thought. It just happened. Thousands and thousands of people out on the streets, organizing their communities… lt gave me a lot of faith in what I believed in.

Then things changed so that the right wing took over the government. What we were doing at one point was sort of legal and sanctioned by the government, then in a very short time it became illegal. That’s when the harsh oppression came down on us and we were all arrested. Some are still in prison, others are dead.

“Mr. and Mrs. Talamante, accompanied by parish priest and community leaders, make a plea to Argentine consul Ricardo Elizondo in San Francisco that Olga be released in ‘the spirit of Christmas.’ Elizondo replies that “There is no torture in Argentina. Your daughter will receive a just and prompt trial.”

The arrest. I was definitely worried about it. It was definitely the kind of situation where you have control and if they shoot you, well, they shoot you. What can you do? For the first two days in prison I really believed I was going to be shot. They had a gun right to my head. What could I say? They wanted me to talk, wanted to find out names, who else was I working with, and so on. And the other thing was getting you to admit you did things like bomb this place or that.

Their main objective was to rape you politically. To make you change your mind, give up those ideals that you have. Make you think “Is it worth it? Are you going to go through this just because of what you think? If you are, you’re a real fool.” They would say “Everybody else has talked, everybody else has turned you in…” “You’re an intelligent young woman,” they would say. “What are you doing being stuck in this? Why don’t you tell us what so and so has done, and we’ll let you go.” Politically and psychologically it was raping to the point of turning other people in or driving a wedge between you. Because politically, they know the best thing that we have going for us is the unity, loyalty, respect and real caring that we have for each other. And that’s what they wanted to break. That’s why they would isolate you so that you wouldn’t be able to say “What did you really say to them?” It was all very scientific.

Then there’s the physical part… electric shocks, beatings, coming in the middle of the night and putting you up against the wall like they were going to shoot you …

“They took all my clothes off and then strapped me to a bed. They tied me spreadeagle fashion … then they proceeded to apply the electric shocks throughout my body. On my head, on my eyes, on top of the adhesive tape, on my nipples, vulva, vagina, the joints of my legs, and my fingers and toes.”

I survived it because everybody else does too… We all did and I think it was all on the basis of the strength of our ideals, our commitment and what we have done, knowing that giving in to them is not only giving in, but giving up all we ever believed in. It was a political battle carrying on right there and then. You don’t come through it perfectly but the main thing is to be able to substain yourself by having faith in the other people, your friends who have also been arrested and not turning other people in. You ask yourself the question “Am I only to give in so safe myself? Or should I hold out?” And you hold on, on the basis of other people doing it too. “Love life enough to struggle.” I wrote that in a letter… and what I was thinking was, I read an article in the newspaper about how these crazy, yelling subversives didn’t care about life. We’re so foolish and crazy, we don’t know what we’re doing. I remember the article had that tone to it. I wrote in response to say that I felt we loved life so much that we were willing to struggle for it. And it’s true. We do want to live, but in a certain way. And to achieve it you begin to struggle for a better life for everybody, and at times you have to suffer for it.

I did the most writing while in prison because that was one of the main ways to communicate. There wasn’t a whole lot you could do. There were five women that got arrested…

My daughter called to
tell me of her first
grey hair: her accomplishment,
her excitement was
clear, “Like you, like
you, mother.” The

cat sits facing the
lone, bloomed daffodil.
as bright as the
sun, and so
many, so many
roses—some

fading, some
blooming, some
invisible to the
eye. They face the
rising moon as
loyal as

blood; and the
cat with its
clusters of seven
within the
swelling fur: as
you grow

old with me, to
grow young with
you —blooming,
bleeding from the
same, sturdy bush,
my daughter.

And I knew
and now remember love