The slider below contains 3 slides. 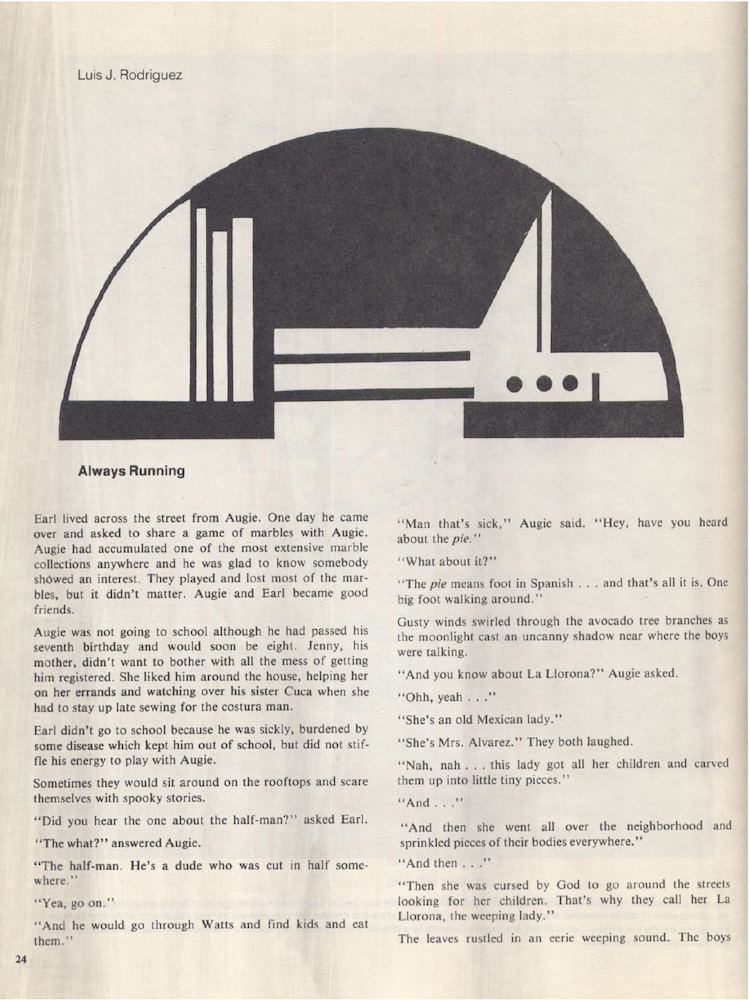 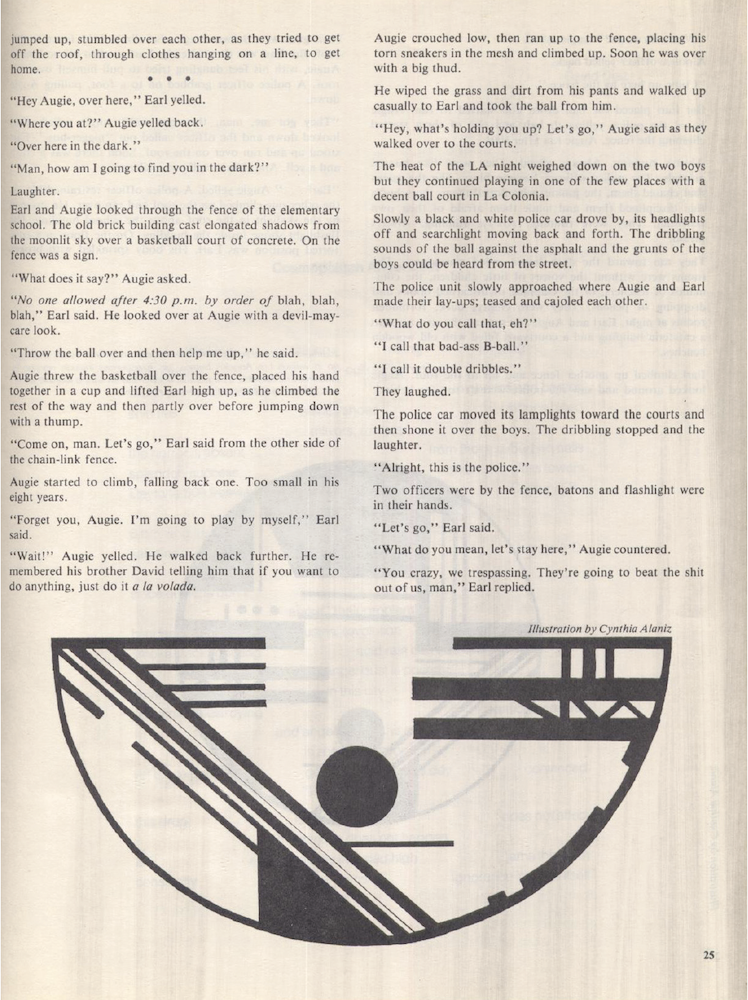 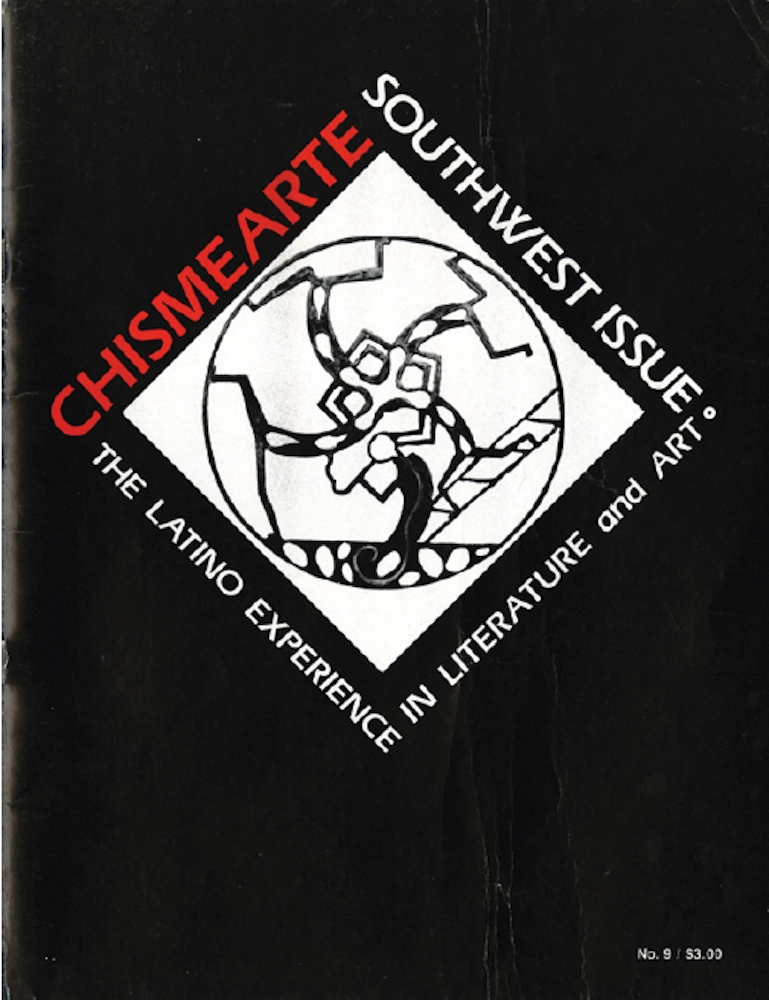 ChismeArte enjoys the distinction of publishing the earliest draft of Always Running: Gang Days in L.A., the 1993 bestselling, critically acclaimed memoir of an L.A. gang-member’s life. Although Rodriguez could not have predicted it, his poetry, novels, and journalism would win him the awards (Carl Sandburg and Chicago Sun-Times Literary awards) and the recognition to co-found organizations devoted to serving at-risk barrio youth. Born in 1954, and raised in South Los Angeles, he witnessed the riots of 1965. At 11 years old, his family moved to the San Gabriel Valley, where he joined the “Lomas” street gang, and continued running with gangs until the 70’s. Despite his gang involvement, his search for meaning led him to the Chicano movement. He joined the East L.A. high school walkouts in 1968 and the Chicano Moratorium against the Vietnam War in 1970. At 18 years old, “a sentence imposed for a criminal conviction was mitigated by letters of support from community members who saw his potential.” Feeling indebted to his community, Rodriguez enrolled at California State University Los Angeles, and afterward, was accepted in UC Berkeley’s Summer Program for Minority Journalists. He then joined the San Bernardino Sun, while spearheading ChismeArte’s last edition. Rodriguez, today a sought-after speaker, still believes in the transformative power of art: “There is probably no more powerful force for change in this uncertain and crisis-ridden world than young people and their art.”

Earl lived across the street from Augie. One day he came over and asked to share a game of marbles with Augie. Augie had accumulated one of the most extensive marble collections anywhere and he was glad to know somebody showed an interest. They played and lost most of the marbles, but it didn’t matter. Augie and Earl became good friends.

Augie was not going to school although he had passed his seventh birthday and would soon be eight. Jenny, his mother, didn’t want to bother with all the mes of getting him registered. She liked him around the house, helping her on her errands and watching over his sister Cuca when he had to stay up late sewing for the costura man.

Earl didn’t go to school because he was sickly, burdened by some disease which kept him out of school, but did not stifle his energy to play with Augie.

Sometimes they would sit around on the rooftops and scare themselves with spooky stories.

“Did you hear the one about the half-man?” asked Earl.

“The what?” answered Augie.

“The half-man. He’s a dude who was cut in half somewhere.”

“And he would go through Watts and find kids and eat them.”

“Man that’s sick,” Augie said. “Hey, have you heard about the pie.”

“The pie means foot in Spanish… and that’s all it is. One big foot walking around.”

Gusty wind swirled through the avocado tree branches at the moonlight cast an uncanny shadow near where the boys were talking.

“And you know about La Llorona?” Augie asked.

“She’s Mrs. Alvarez.” They both laughed.

“Nah, nah … this lady got all her children and carved them up into little tiny pieces.”

“And then she went all over the neighborhood and sprinkled pieces of their bodies everywhere.”

“Then she was cursed by God to go around the streets looking for her children. That’s why they call her La Llorona, the weeping lady.”

The leaves rustled in an eerie weeping sound. The boys jumped up, stumbled over each other, as they tried to get off the roof, through clothes hanging on a line, to get home.

“Where you at?” Augie yelled back.

“Over here in the dark.”

Earl and Augie looked through the fence of the elementary school. The old brick building cast elongated shadows from the moonlit sky over a basketball court of concrete. On the fence was a sign.

“What does it say?” Augie asked.

“No one allowed after 4:30 p.m. by order of blah, blah, blah,” Earl said. He looked over at Augie with a devil-may-care look.

”Throw the ball over and then help me up,” he said.

Augie threw the basketball over the fence, placed his hand together in a cup and lifted Earl high up, as he climbed the rest of the way and then partly over before jumping down with a thump.

“Come on, man. Let’s go,” Earl said from the other side of the chain-link fence.

Augie started to climb, falling back one. Too small in his eight years.

“Forget you, Augie. I’m going to play by myself,” Earl said.

“Wait!” Augie yelled. He walked back further. He remembered his brother David telling him that if you want to do anything, just do it a la volada.

Augie crouched low, then ran up to the fence, placing his torn sneaker in the mesh and climbed up. Soon he was over with a big thud.

He wiped the grass and dirt from his pants and walked up casually to Earl and took the ball from him.

“Hey, what’s holding you up? Let’s go,” Augie said as they walked over to the courts.

The heat of the LA night weighed down on the two boys but they continued playing in one of the few places with a decent ball court in La Colonia.

Slowly a black and white police car drove by, its headlights off and searchlight moving back and forth. The dribbling sound of the ball against the asphalt and the grunt of the boys could be heard from the street.

The police unit slowly approached where Augie and Earl made their lay-ups; teased and cajoled each other.

“I call it double dribbles.”

The police car moved its lamplight toward the courts and then shone it over the boys. The dribbling stopped and the laughter.

“Alright, this is the police.”

Two officers were by the fence, batons and flashlight were in their hands.

“What do you mean, let’s stay here,” Augie countered.

“You crazy, we trespassing. They’re going to beat the shit out of us, man,” Earl replied.