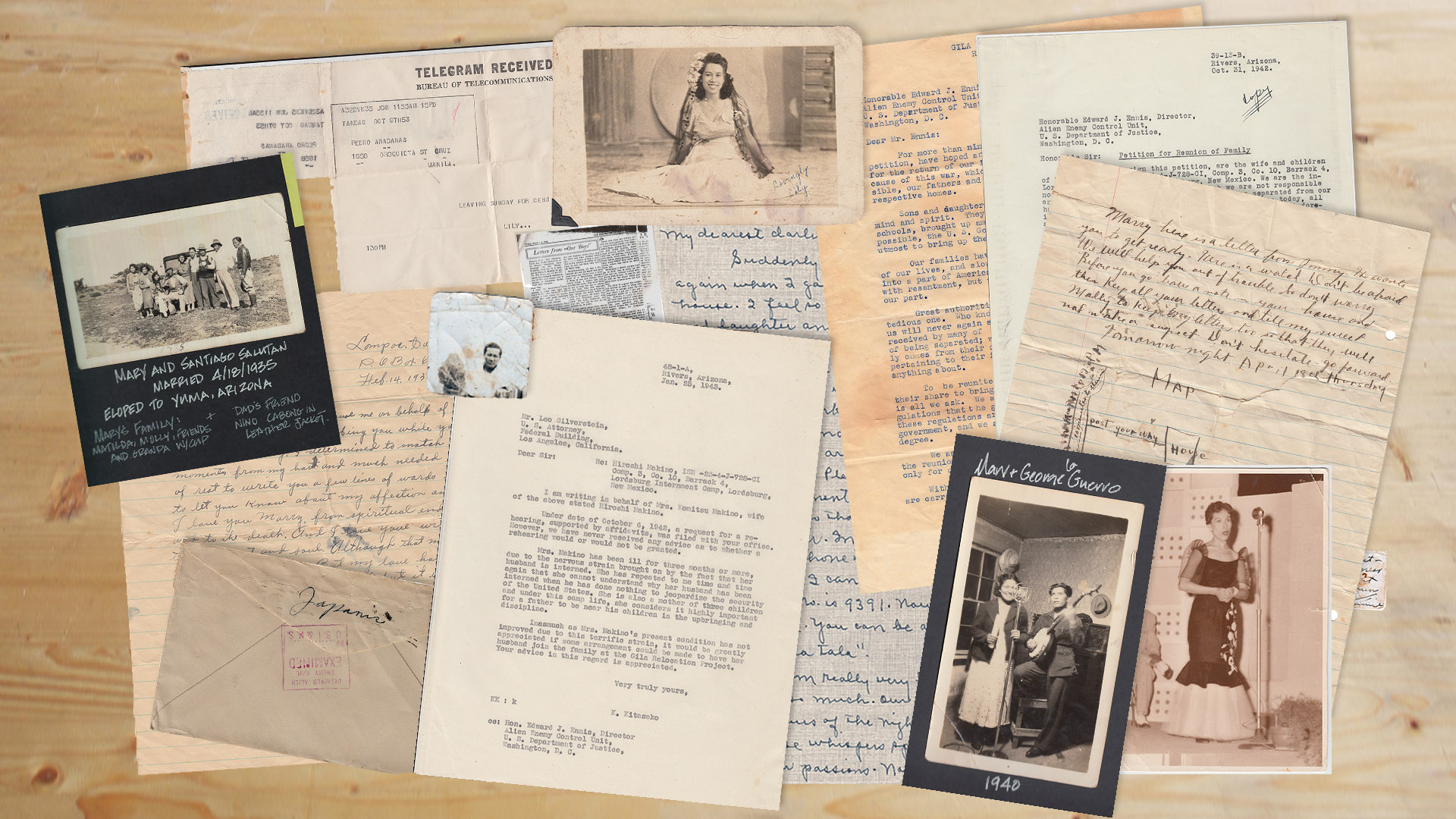 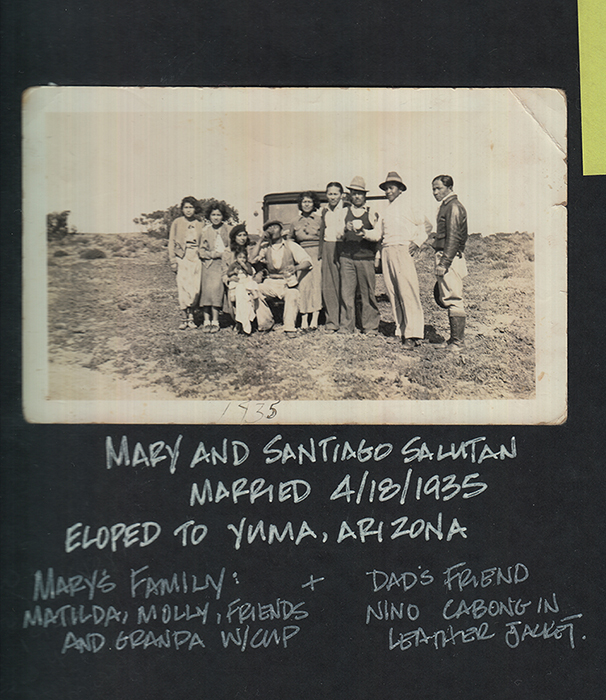 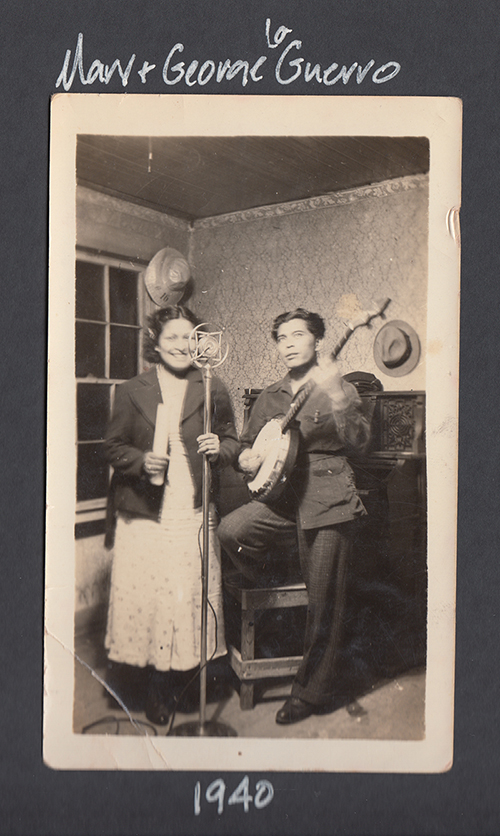 In the 1920s, Santiago Salutan, or “Jimmy,” hopped on a U.S.-bound ship because he had fought for, and lost, the hand of a woman to his brother— but also because this transpacific route was already carved out by U.S. interests in the Philippines. In 1935, U.S. imperialism and California agribusiness brought together Jimmy, a Filipino migrant, and Mary Olvera, a Mexican American. The couple met working in the fields in Lompoc, California, a small agricultural town north of Santa Barbara.

Neither Mary’s family nor the state of California, however, sanctioned this mixing of the “blood.” Jimmy and Mary courted each other through letters since they were not able to do so publicly. In a culture influenced by Spanish Catholicism and Victorian-era gender expectations brought by Americans, chastity was a prized virtue and physical contact was prohibited. Moreover, letter writing was among the many rituals of courtship, like serenading, brought over by Filipino migrants. They used letters passed through friends to plan their elopement in Yuma, Arizona.

Archival photograph. Their daughter Rosalie wrote, “The one thing that really stands out in my memory was the happy gatherings. My parents used to like to party. We were always slaughtering pigs, making lechon and adobo. We used to have parties that lasted for three days. I just don’t know how my parents survived all those celebrations. At some of the parties, my father would play his guitar and ukulele. When they were not partying, my parents were writing their favorite songs. They were always singing and dancing. This was their entertainment.” Mary and George La Guerro performing.  Courtesy of Rosalie Marquez. From the Exhibit “Objects of Affection.” Robert E. Kennedy Library, Cal Poly San Luis Obispo, California. 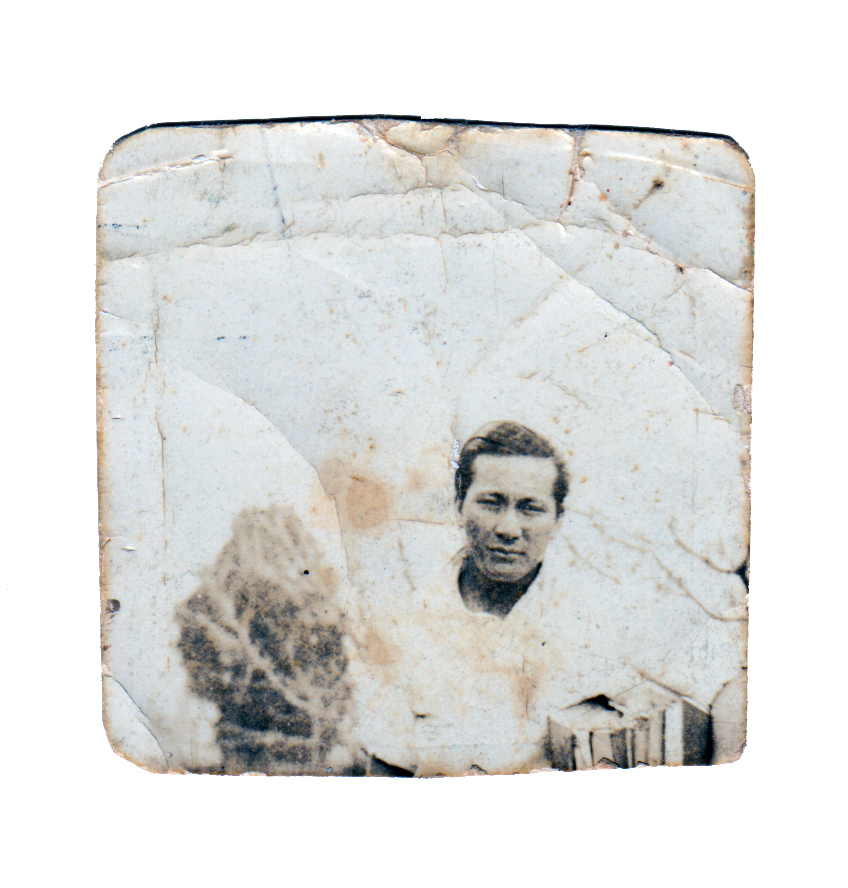 Forgetfullness is Not Known, Jimmy; included in the letters between JImmy Salutan and Mary Olvera, planning their elopement.

Archival photograph. Photograph of Santiago "Jimmy" Salutan that he attaches to a letter to Mary Olvera. Inscribed on the back are the words, "Forgetfullness is not known," perhaps referencing lines from his letter. Courtesy of Rosalie Marquez. From the Exhibit “Objects of Affection.” Robert E. Kennedy Library, Cal Poly San Luis Obispo, California. 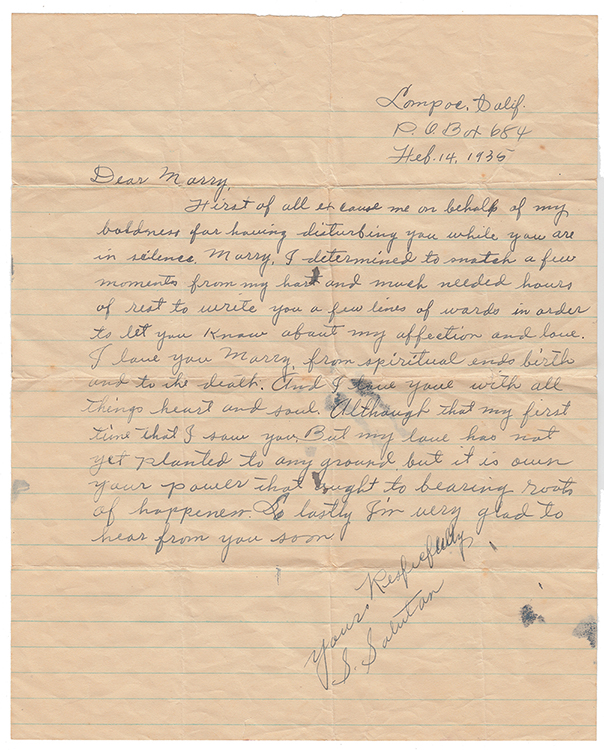 First of all excuse me on behalf of my boldness for having disturbing you while you are in silence. Marry, I determined to snatch a few moments from my hart [heart] and much needed hours of rest to write you a few lines of words in order to let you know about my affection and love. I love you Marry, from spiritual ends birth and to the death. And I love you with all things heart and soul. Although that my first time that I saw you. But my love has not yet planted to any ground but it is own your power that aught to bearing roots of happiness. So lastly I’m very glad to hear from you soon.

Archival letter. This is the first love letter from Jimmy Salutan to Mary Olvero assuring his love to her. Courtesy of Rosalie Marquez. From the Exhibit “Objects of Affection.” Robert E. Kennedy Library, Cal Poly San Luis Obispo, California. 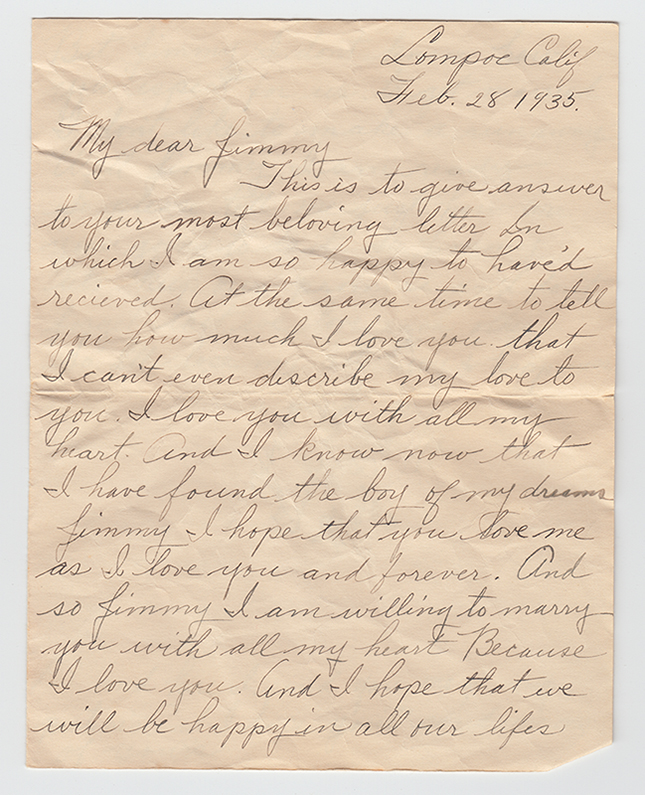 This is to give answer to your most beloving letter [illegible] which I am so happy to have’d received. At the same time to tell you how much I love you that I can’t even describe my love to you. I love you with all my heart. And I know now that I have found the boy of my dreams. Jimmy I hope that you love me as I love you and forever. And so Jimmy I am willing to marry you with all my heart Because I love you. And I hope that we will be happy in all our lifes [sic]

Forgetfullness is not known, Jimmy

Archival photograph (backside.) Inscription on the photograph of Santiago "Jimmy" Salutan that he attaches to a letter to Mary Olvera. Inscribed on the back are the words, "Forgetfullness is not known," perhaps referencing lines from his letter. Courtesy of Rosalie Marquez. From the Exhibit “Objects of Affection.” Robert E. Kennedy Library, Cal Poly San Luis Obispo, California. 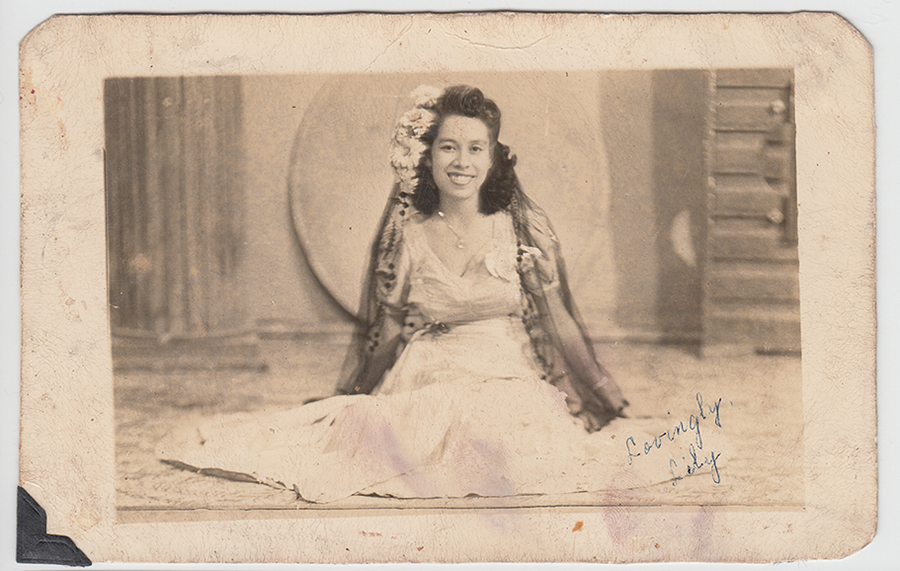 Closing the gap and the conditions for intimacy are always constrained by social and historical conditions and by the medium of expression. But within these constraints, we witness a bit of human ingenuity.

“The object of my affection
Can change my complexion
From white to a rosy red
Anytime he holds my hand
and tells me that he’s mine.”
“Object of My Affection” (1935) 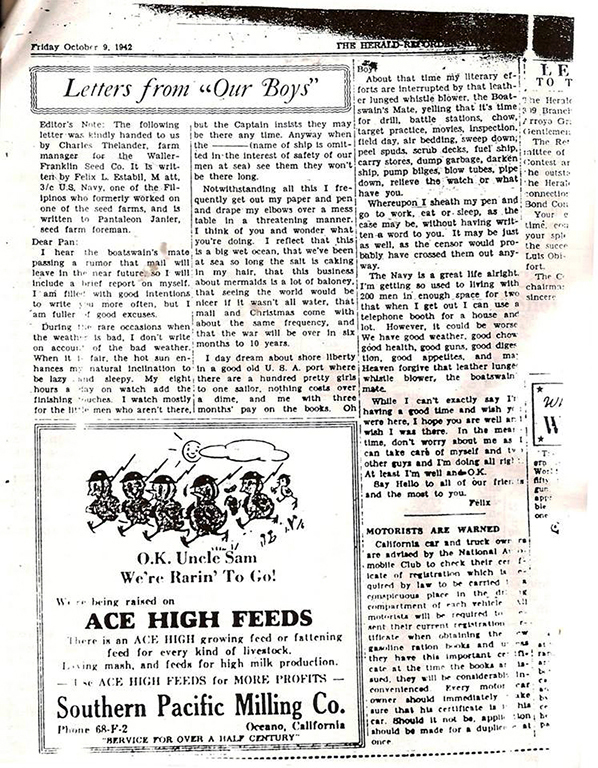 I hear the boatswain’s mate passing a rumor that mail will leave in the near future, so I will include a brief report on myself. I am filled with good intentions to write you more often, but I am fuller of good excuses.

During the rare occasions when the weather is bad, I don’t write on account of the bad weather. When it is fair, the hot sun enhances my natural inclination to be lazy and sleepy. My eight hours a day on watch add the finishing touches. I watch mostly for the little men who aren’t there, but the Captain insists they may be there any time. Anyway when the [name of the ship is omitted in the interest of safety of our men at sea] see them they won’t be there long.

Notwithstanding all this I frequently get out my paper and pen and drape my elbows over a mess table in a threatening manner. I think of you and wonder what you’re doing. I reflect that this is a big wet ocean, that we’ve been at sea so long the salt is caking in my hair, that this business about mermaids is a lot of baloney, that seeing the world would be nicer if it wasn’t all water, that mail and Christmas come with about the same frequency, and that the war will be over in six months to ten years.

I day dream about shore liberty in a good old U.S.A. port where there are a hundred pretty girls to one sailor, nothing costs over a dime, and me with three months’ pay on the books. Oh Boy!

Whereupon I sheath my pen and go to work, eat or sleep, as the case may be, without having written a word to you. It may be just as well, as the censor would probably have crossed them out anyway.

The Navy is a great life alright. I’m getting so used to living with 200 men in enough space for two that when I get out I can use a telephone booth for a house and lot. However, it could be worse. We have good weather, good chow, good health, good guns, good digestion, good appetites, and may Heaven forgive that leather lunged whistle blower, the boatswain mate.

While I can’t exactly say I’m having a good time and wish you were here, I hope you are well and wish I was there. In the meantime, don’t worry about me as I can take care of myself and two other guys and I’m doing all right. At least I’m well and OK.

Say hello to all of our friends and the most to you. —Felix 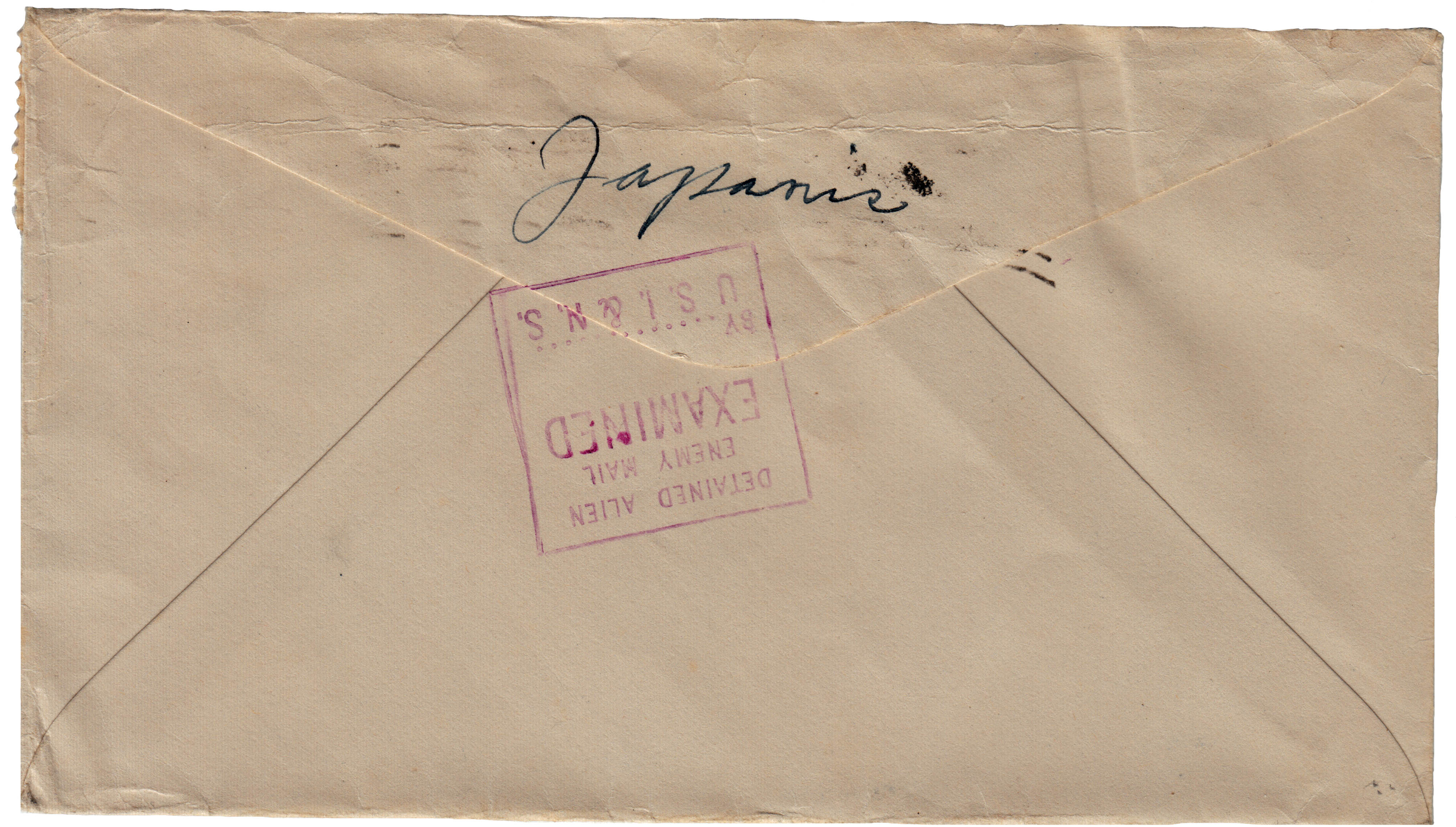 Michiko Aoki’s mother and father (Mr. and Mrs. Makino) were separated during the internment of Japanese Americans. Ken Kitasako helped write letters on behalf of separated families. The stamp on the envelope, “Detained Alien Enemy Mail, Examined,” was not uncommon during World War II. The Censorship Division, was established to examine and censor all incoming and outgoing mail of internees. The stamp identified the writer as an interned enemy alien to anyone who would come in contact with the correspondence. 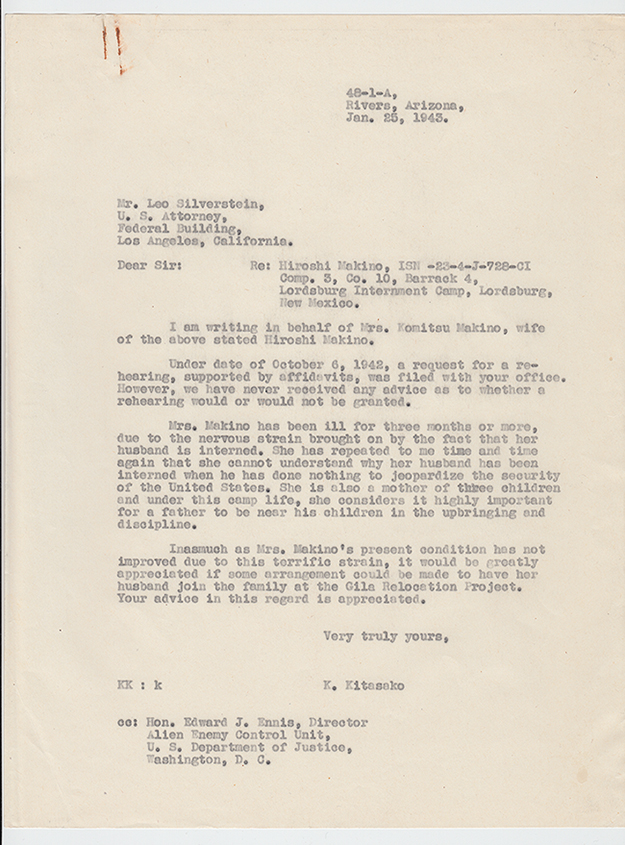 I am writing in behalf of Mrs. Komitsu Makino, wife of the above stated Hiroshi Makino.

Under date of October 6, 1942, a request for a rehearing, supported by affidavits, was filed with your office. However, we have never received any advice as to whether a rehearing would or would not be granted.

Mrs. Makino has been ill for three months or more, due to the nervous strain brought on by the fact that her husband is interned. She has repeated to me time and time again that she cannot understand why her husband has been interned when he has done nothing to jeopardize the security of the United States. She is also a mother of three children and under this camp life, she considers it highly important for a father to be near his children in the upbringing and discipline.

Inasmuch as Mrs. Makino’s present condition has not improved due to this terrific strain, it would be greatly appreciated if some arrangement could be made to have her husband join the family at the Gila Relocation Project. Your advice in this regard is appreciated. 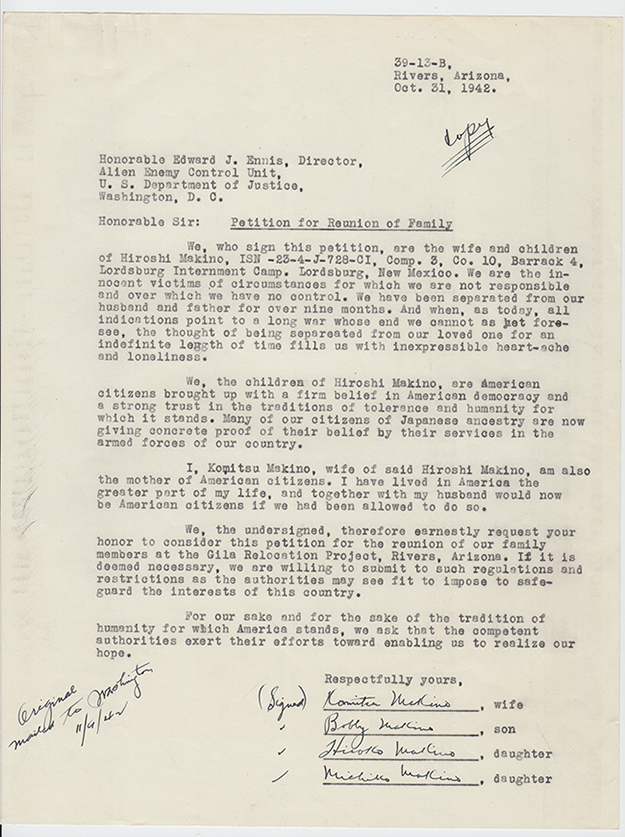 We, who sign this petition, are the wife and children of Hiroshi Makino, ISN-23-4-J-728-CI, Comp. 3, Co. 10, Barrack 4, Lordsburg Internment Camp. Lordsburg, New Mexico. We are the innocent victims of circumstances for which we are not responsible and over which we have no control. We have been separated from our father for over nine months. And when, as today, all indications point to a long war whose end we cannot yet foresee, the thought of being separeated [sic] from our loved one for an indefinite lenggth [sic] of time fills us with inexpressible heart-ache and loneliness.

We, the children of Hiroshi Makino, are American citizens brought up with a firm belief in American democracy and a strong trust in the traditions of tolerance and humanity for which it stands. Many of our citizens of Japanese ancestry are now giving concrete proof of their belief by their services in the armed forces of our country.

I, Komitsu Makino, wife of said Hiroshi Makino, am also the mother of American citizens. I have lived in America the greater part of my life, and together with my husband would now be American citizens if we had been allowed to do so.

We, the undersigned, therefore earnestly request your honor to consider this petition for the reunion of our family members at the Gila Relocation Project, Rivers, Arizona. If it is deemed necessary, we are willing to submit to such regulations and restrictions as the authorities may see fit to impose to safeguard the interests of this country.

For our sake and for the sake of the tradition of humanity for which America stands, we ask that the competent authorities exert their efforts toward enabling us to realize our hope.